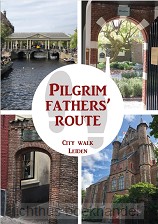 Walking in the footsteps of the Pilgrim Fathers in Leiden. They left leiden city in1620 and going to Delfshaven and the Mayflower for going to the New Land, where they arrived in Plymouth.

Ichthusboekhandel made a route through the old streets of Leiden. You are welcome to the history of the Pilgrim Fathers, The Statenvertaling (the bible like the KJV) and the dispute of Gomarus and Arminius which take place in the city with the first university of the Netherlands.

On this walk you find also the Pilgrim Fathers Museum in the Beschuitsteeg, near to Ichthusbookstore.