where the light shines through 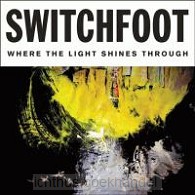 Ironically, this album of light was born from one of the darkest times I've ever been through. But instead of running away from the darkness, I wanted to meet it face to face. So I made a commitment to sit on a rock near the ocean for thirty minutes a day and wrestle with these dark questions. The darkness and I would argue every night. On the same rock, under the same stars: just the darkness and I fighting it out alongside of the uncompromising roar of the pacific ocean. And somehow, against that backdrop of darkness, light began to break through. These scars of mine began to turn into songs. What are my struggles? What are my fears? Where do I find God? Or more aptly put- where does God find me?

Lately, he's been finding me in the dark, sitting on a rock beside the ocean. And through these times in the dark I'm beginning to realize that “living it well” means something bigger than just pretending: pretending that everything is OK, pretending that I have all the answers. That living well begins by acknowledging the wound. After all, the dark wounds of our world are inescapable- the wound is you, it's me, it's humanity. The wound is Afghanistan, it's Palestine, it's the United States. The wound is our broken homes, our broken marriages, our broken hearts. The wound is Golgotha, the wound is the cross. But rather than running away, let's embrace the truth about our broken humanity, and the truth will set us free! Let's not pretend to be well- after all, it's the sick that need a doctor. No, we are the wounded. Mortally wounded. Darkly wounded. Do we really believe in a Living God who is our redeemer, strong and loving- capable of healing these wounds? If so, then let's bring our darkness to him. All of it. Life is short I want to live it well.

The wound is WHERE THE LIGHT SHINES THROUGH.