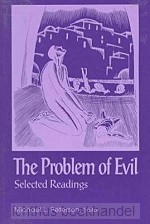 Widely recognized as the most powerful barrier to belief in God, the problem of evil poses the simple yet profound question; how can evil be reconciled with the existence of an all-good, all powerful God? Edited by Michael Peterson and published in 1992, `The Problem of Evil' is a collection of essays discussing the relationship between God and evil.

The structure of the text is as follows;

1. Statement of the problem.
2. Discussion of the leading versions of the argument, the logical argument - evil and God are incompatible, the evidential argument - God is improbable given evil, and, the existential argument - the personal impact of evil on belief.
3. Potential theodicies or explanations for why God might allow evil
4. Additional issues

Overall, the text provides a solid introduction to the problem of evil, its various formulations, key thinkers and major themes. A particular strength is the use of classic literary excerpts to introduce the problem of evil. This approach may strike a responsive chord with readers in a way that a purely philosophical discussion would not. The text also contains a range of classic contributions by Augustine, Hume, Hick, Mackie and Plantinga amongst others

While generally solid, the text's greatest shortcoming is its dated feel. That is, while the book touches on the various formulations of the argument it is primarily focused on the largely defunct logical argument which asserts the coexistence of God and evil poses a contradiction.

While this has been the tradition formulation of the argument it is considered by most commentators to be a dead argument. And, given its failure contemporary philosophical discussion of the problem of evil has shifted to what is known as the evidential argument. Which, rather than assert that the coexistence of evil and God are impossible, it makes the more modest claim that evil, or at least certain types of evil, make the existence of God unlikely

While the evidential argument remains a topic of serious debate the relevant essays are rather weak. In particular the piece from Michael Martin is too terse and dogmatic to provide a good introduction for readers new to the subject. It should be replaced in any subsequent edition (Rowe has some excellent essays that might be helpful in this regard). Also with respect to drawbacks, Swinburne's contribution on natural evil is also rather weak and could be replaced (perhaps by something from by Reichenbach or Murray).

Overall this is a solid but slightly dated introduction to the problem of evil. Much interesting work has been done in the last twenty years and the text is in need of an update to better capture current thought. Readers interested in this subject may also enjoy Marilyn and Robert Adams' small anthology on the problem of evil in Oxford Reading in Philosophy series. It has some classic essays but, it too is a bit dated (1991)