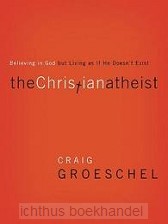 From his own lapses in faith as a young man to the painful self-admission he had to make as an established pastor, Groeschel's own journey will immerse you and challenge you into a deeper, Christ-filled life.

“The more I looked, the more I found Christian Atheists everywhere.” Former Christian Atheist Craig Groeschel knows his subject all too well. After over a decade of successful ministry, he had to make a painful self admission: although he believed in God, he was leading his church like God didn't exist. To Christians and non-Christians alike, to the churched and the unchurched, the journey leading up to Groeschel's admission and the journey that follows—from his family and his upbringing to the lackluster and even diametrically opposed expressions of faith he encountered—will look and sound like the story of their own lives. Now the founding and senior pastor of the multicampus, pace-setting LifeChurch.tv, Groeschel's personal journey toward a more authentic God-honoring life is more relevant than ever. Christians and Christian Atheists everywhere will be nodding their heads as they are challenged to take their own honest moment and ask the question: am I putting my whole faith in God but still living as if everything was up to me?

Craig Groeschel is the founding and senior pastor of LifeChurch.tv, a pace-setting multicampus church and creators of the popular and free YouVersion Bible App. He is the author of several books including Weird,The Christian Atheist and It.