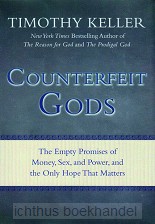 The issue of idolatry has been with the human race for thousands of years;

the subtle temptation is always to take what is good and turn it into the ultimate good, elevating it above all other things in the search for security and meaning.

In this timely and challenging book, New York pastor Timothy Keller looks at the issue of idolatry throughout the Bible -- from the worship of actual idols in the Old Testament, to the idolatry of money by the rich young ruler when he was challenged by Jesus to give up all his wealth. Using classic stories from the Bible Keller cuts through our dependence on the glittering false idols of money, sex and power to uncover the path towards trust in the real ultimate -- God. Today's idols may look different from those of the Old Testament, but Keller argues that they are no less damaging. Culturally transforming as well as biblically based, Counterfeit Gods is a powerful look at the temptation to worship what can only disappoint, and is a vital message in today's current climate of financial and social difficulty.

Timothy Keller was born and raised in Pennsylvania, and educated at Bucknell University, Gordon-Conwell Theological Seminary, and Westminster Theological Seminary. However, he learned the most from his nine years as a pastor of West Hopewell Presbyterian Church in the small blue-collar town of Hopewell, Virginia. The congregation there loved him, suffered through his earliest days as a pastor, and taught an intellectual northerner to be clear.

His second church was Redeemer Presbyterian Church in Manhattan, which he started in 1989 with his wife, Kathy, and three young sons.

The Influentials Issue of New York Magazine featured Dr. Keller as “the most successful Christian evangelist in the city by recognizing that young professionals and artists are 'disproportionately influential' in creating the country's culture and that you have to meet this coveted demographic on its own terms.”