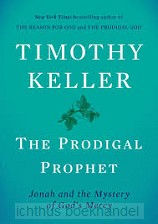 Tim Keller in The prodigal Prophet about Johah and the mystery of God's Mercy writes about an angry profhet and a gracious and merciful God.

Most people, even those who are nonreligious, are familiar with the book of Jonah: a rebellious prophet defies God and is swallowed by a whale. Less familiar to most people is the second half of this Biblical story--what happens after Jonah is released from the belly of the fish.

Yet it is in this second half of the story that one of the most powerful and important lessons of the Bible is hidden. The famous story shows how, if we would understand the mercy of God, it will always take us in directions we would rather not go, toward people we would rather not care about, and ultimately into the deepest counsels of God.