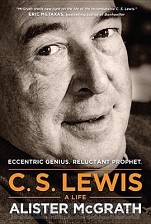 Fifty years after his death, C. S. Lewis continues to inspire and fascinate millions. His legacy remains varied and vast. He was a towering intellectual figure, a popular fiction author who inspired a global movie franchise around the world of Narnia, and an atheist-turned-Christian thinker.

In "C.S. Lewis--A Life," Alister McGrath, prolific author and respected professor at King's College of London, paints a definitive portrait of the life of C. S. Lewis. After thoroughly examining recently published Lewis correspondence, Alister challenges some of the previously held beliefs about the exact timing of Lewis's shift from atheism to theism and then to Christianity. He paints a portrait of an eccentric thinker who became an inspiring, though reluctant, prophet for our times.You won't want to miss this fascinating portrait of a creative genius who inspired generations.

The recent Narnia films have inspired a resurgence of interest in C. S. Lewis, the Oxford academic, popular theologian and, most famously, creator of the magical world of Narnia - and this authoritative new biography, published to mark the 50th anniversary of Lewis's death, sets out to introduce him to a new generation.

Completely up to date with scholarly studies of Lewis, it also focuses on how Lewis came to write the Narnia books, and why they have proved so consistently engaging. Accessible and engaging, this new biography will appeal to fans of the films, readers of Lewis and of theologian and apologist Alister McGrath himself.

Alister E. McGrath is Professor of Theology, Ministry and Education, and the Head of the Centre for Theology, Religion & Culture at King's College London, having previously been Professor of Historical Theology at Oxford University, UK. He is one of the world's leading theologians, and is in constant demand as a speaker at conferences throughout the world. McGrath is the author of some of the most widely used theology textbooks, including the bestselling Christian Theology: An Introduction, 5th edition (2010, Wiley-Blackwell), and author of books including Mere Theology: Christian Faith and the Discipleship of the Mind (2010), and C. S. Lewis: A Life (2013).