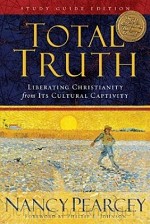 This book continues the Schaeffer-inspired project that Nancy Pearcey and Chuck Colson began in How Now Shall We Live?-awakening evangelical Christians to the need for a Christian 'worldview,' which Pearcey defines as 'a biblically informed perspective on all reality.' This is the rare long book that leaves one wanting to read more." — Publishers Weekly

On one level, this book is a lucid, easy-to-understand manual for worldview thinking. But it also breaks new ground in worldview analysis." — World Magazine

"Pearcey is an outstanding writer with the ability not only to express deep thoughts in a very readable way, but one who also understands a biblically reformed world and life view. If you buy only one book this year, this would be at the top of the list." — Equip For Ministry

"Pearcey helps readers see how many modern Christians unwittingly accept a sacred/secular split, which allows them to relegate faith to the private sphere of life. She then clearly puts forth a Scriptural picture of integrating all of life under the liberating Lordship of Christ and shows what that truth means for the areas of public policy, family life, science, business, law, education, and more." — Covenant Magazine

Total Truth questions the modern American cultural attitude of keeping religion a private matter, claiming that Christianity's truth is best served by being brought into the public sphere to maximize its influence." — Midwest Book Review

"Thoroughly researched, well-written and well-argued, Total Truth will prove to be a useful and easily accessible guidebook for many who seek to develop a comprehensive biblical worldview that affects not only beliefs but actions." — CaliforniaRepublic.org

Nancy Pearcey wrote her latest book, Saving Leonardo, while serving as research professor of Worldview Studies at Philadelphia Biblical University. Pearcey studied Christian worldview at L'Abri Fellowship in Switzerland with Francis Schaeffer, and was later named the Francis A. Schaeffer Scholar at the World Journalism Institute in New York City. She earned a masters degree from Covenant Theological Seminary, and pursued further graduate work in the History of Philosophy at the Institute for Christian Studies in Toronto. Pearcey has been a commentator on Public Square Radio, the founding editor of the daily radio program "BreakPoint," and has appeared on NPR and C-SPAN. Currently she is a fellow at the Discovery Institute and editor-at-large of The Pearcey Report. She coauthored a column in Christianity Today, and has authored or contributed to several books, including The Soul of Science and How Now Shall We Live? (with Charles Colson, contributions by Harold Fickett). Her most recent book was the bestselling Total Truth: Liberating Christianity from Its Cultural Captivity, which won the 2005 ECPA Gold Medallion Award for best book of the year on Christianity & Society.

Pearcey is homeschooling her son and has taught several homeschool courses for high schoolers, most recently a course based on her new book, Saving Leonardo: A Call to Resist the Secular Assault on Mind, Morals, & Meaning. She discovered that making the concepts clear and simple enough for high schoolers made the book far more accessible for all readers. She has decided that teens make the best editors, and from now on, she hopes to teach all her books to teens before they are published.