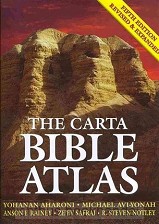 The Carta Bible Atlas, by its original authors, Yohanan Aharoni and Michael Avi-Yonah, has consistently sought to provide precise details for each of the major events described in the Bible.

As research has progressed and new discoveries have been made, the succeeding authors have revised previous material, adding fresh maps and texts to supply a more complete picture for many of the biblical narratives.

The land of Canaan/Israel/Palaestina is still a focal point for millions of Bible lovers, Jewish and Christian. The history of that geographical entity cannot be divorced from the wider context of the Ancient Near East and the Graeco-Roman world. Historical Geography, putting the Bible on the Map, is an attempt to understand the biblical events in their ecological and socio-cultural context. It is an essential component of biblical studies if one truly desires to empathize with the ancient people whose religious experience we claim to share. This fifth edition will enrich the Bible study of all students, teachers and scholars who sincerely desire to bring the Bible down to earth.

Rainey has added a number of maps from the broader Levantine history, placing the biblical events in a solid framework of Near Eastern culture and has thoroughly revised subsequent chapters. Notley has revised and enhanced the portions dealing with New Testament events. He has also extended the reach of the atlas to the beginning of the fourth century A.D. by adding a chapter on the Holy Land according to the Onomasticon of Eusebius, bishop of Caesarea.

Do you Know the Answers? (Found in THE CARTA BIBLE ATLAS):

* What were the origins of David's men of valor?
* What were the beginnings of the Maccabean revolt?
* How and when did Herod the Great rise to power?

Answers to these and endless other questions relating to the Old Testament, Intertestamental and New Testament periods can be found (with maps) in THE CARTA BIBLE ATLAS.