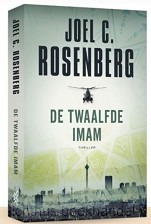 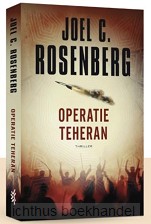 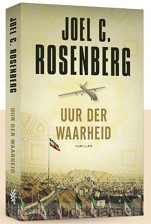 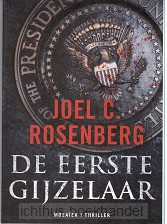 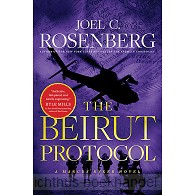 The Beirut Protocol is part 4 of the Marcus Rijker serie. A game-changing peace treaty between Israel and the Saudis is nearly done. The secretary of state is headed to the region to seal the deal. And Special Agent Marcus Ryker is leading an advance trip along the Israeli-Lebanon border, ahead of the secretary's arrival.

But when Ryker and his team are ambushed by Hezbollah forces, a nightmare scenario begins to unfold. The last thing the White House can afford is a new war in the Mideast that could derail the treaty and set the region ablaze. U.S. and Israeli forces are mobilizing to find the hostages and get them home, but Ryker knows the clock is ticking.

When Hezbollah realizes who they've captured, no amount of ransom will save them--they'll be transferred to Beirut and then to Tehran to be executed on live television.

In the fourth installment of Rosenberg's gripping new series, Marcus Ryker finds himself in the most dangerous situation he has ever faced--captured, brutalized, and dragged deep behind enemy lines.

Should he wait to be rescued? Or try to escape? How? And what if his colleagues are too wounded to run?

This is the CIA's most valuable operative as you have never seen him before.

The enemy is invisible and moving fast. The body count is rising. And time is running out.Marcus Ryker has spent his entire career studying killers. One thing he knows for sure: a peace summit is the ultimate stage for an assassination.President Andrew Clarke is determined to announce his historic peace plan from the Temple Mount in Jerusalem. But when senior American officials who support the plan begin violently dying, Clarke orders Ryker and his team of CIA operatives to hunt down those responsible and bring the killing spree to an end.When the Palestinians denounce the American plan, the Saudis signal they may be ready to forge a historic treaty with Israel. Could the Saudi king's support be the missing ingredient that will lead to peace at long last?Ryker soon uncovers a chilling plot to kill the American president. A well-resourced international alliance is dead set against the peace plan. They will stop at nothing to strike a blow against the Americans and seize leadership of the Muslim world.With all eyes on Jerusalem and the president in the crosshairs, it's up to Ryker to eliminate the terrible evil that's been set in motion. The fate of the region depends on his success. He has 48 hours.

From the New York Times bestselling author Joel C. Rosenberg who wrote The Kremlin Conspiracy comes this latest international thriller about a terrifying nuclear alliance among three world powers, Russia, Iran, and North Korea and the man who must halt their deadly strategy.

Shot out of the air in enemy territory in the middle of the greatest international crisis since the end of the Cold War, former U.S. Secret Service agent Marcus Ryker finds himself facing an impossible task. Not only does he have to somehow elude detection and capture by Russian special forces, but he must convince his own government to grant safe harbor to the one man responsible for the global mayhem?Russian double agent and assassin Oleg Kraskin. While frantically negotiating with his contacts in the White House, Marcus learns that the unstable North Korean regime plans to use the international chaos as a smokescreen to sell nuclear weapons to Iran.

With the fate of the entire free world on the line, Marcus makes a deal with the U.S. government?he will go back to work as an international operative and track down the WMDs before they end up in the hands of those with the determination and the means to use them. Marcus and Oleg worked together once before to avert a world war.

Can they now find a way to stop world destruction?