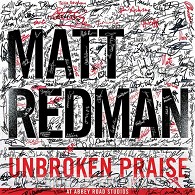 Matt Redman kwam in de maand juni uit met een nieuwe CD Unbroken praise, opgenomen in Abbey Road Studios in Londen. Following two of the bestselling albums of his career, Matt Redmans latest album releases June 16. The album was recorded at Abbey Road studios in London. The first single goes for adds at radio May 15.As the writer of many of the most popular worship songs like Blessed Be Your Name, The Heart Of Worship, and Better Is One Day, Matt Redmans songs are sung by millions of people every Sunday. His recent hit 10,000 Reasons (Bless The Lord) spent 19 weeks at No. 1 while selling over 675,000 tracks. The song also garnered two GRAMMY Awards, a Billboard Music Award and was named ASCAPs Christian Music Song of the Year.As part of the sixstepsrecords family but hailing from the UK, Matt has been involved in leading at the Passion Conferences for years, most recently at the Passion conferences in Atlanta and Houston with over 30,000 university students. Along with Louie Giglio, Chris Tomlin, Christy Nockels and Kristian Stanfill, Matt was one of the founding members of Passion City Church in Atlanta, Georgia.Tracklist: * Louder* It Is Well With My Soul* Flames* Unbroken Praise* Abide With Me* King Of My Soul* Songs In The Night* No One Like Our God* The Awesome God You Are* No Longer I* Majesty Of The Most High