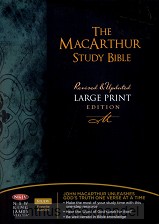 The Macarthur Studybible is a classic and a standard in biblestudy. The "MacArthur Study Bible NKJV" is perfect for serious study.

Dr. John MacArthur has collected his pastoral and scholarly work of more than 35 years to create the most comprehensive study Bible available. No other study Bible does such a thorough job of explaining the historical context, unfolding the meaning of the text, and making it practical for your life.

Initially only available in the New King James Version, the MacArthur Study Bible is now also published using the New American Standard Bible, English Standard Version, and New International Version texts, as well as in Spanish, German, French, Italian and Portuguese. In 1998, it won the Gold Medallion Book Award for Study Bible of the Year, and as of 2007 had more than 1 million copies distributed.

The Macarthur Studybible has been criticized for its views on dispensationalist premillennialism in eschatology, and limited atonement,(along with other Reformed or Calvinist doctrines)